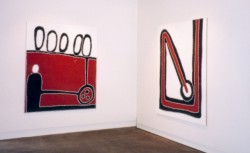 Meaning "One", the Jirrawun Aboriginal Art Corporation was formed by a group of Kimberley artists in the mid 1990s, with Freddie Timms as Chairperson.

The work of this group is in the distinctive Kimberley style made famous by Rover Thomas and Queenie McKenzie: sparse, flat expanses of natural ochres and minimal dotting to form bold, imposing images of country.

Paintings depicting the often violent relations between white settlers and the local peoples are common; interestingly, many of the Jirrawun artists originally worked as stockmen for white-owned stations.

Members of the group include: