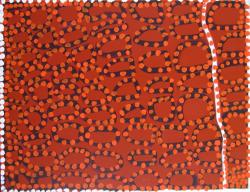 Bidyadanga is a coastal town situated 250km south of Broome and is traditional land of the Karrajarri. For many years it was known as La Grange station. In the 1970's the station was taken over by the Catholic Church who ran it as a mission for various community groups. The introduction of the equal pay decision in the 1970's resulted in many aboriginal people being forced from their traditional country by station owners and into such missions and towns.

This is when many of the Yulparija people came to Bidyadanga from their country which runs from Telfer in the south to Kintore in the east and to close to Fitzroy Crossing in the north. Most of the Bidyadanga artists are the Yulparija elders who have spent most of their lives in the desert living in the traditional bush way. Much of their work reflects this and depicts the country on the Canning stock route around well 33.

When the Karrajarri were returned their land last year, many of the elders started thinking about their traditional country, and the fact that many of their grandchildren will never know it. This lead to their desire to start painting. They have shown an extraordinary talent combining their intimate knowledge of the desert landscape with the rich colours of the salt water country which has resulted in a unique style of painting.

Members of the group include: