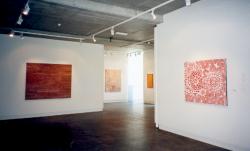 The Papunya Tula Artists' office and gallery is based at Alice Springs, and services a large number of artists living in communities around Alice Springs, most notably Kiwirrkura and Kintore.

The history of the Papunya Tula art movement is the best known of the contemporary indigenous art movements in Australia, particularly after the major retrospective held at the Art Gallery of New South Wales in 2000, Papunya Tula: Genesis and Genius. The retrospective traced the history of the movement from 1972 when a group of senior men in the Papunya community began to paint their traditional designs, previously confined to ground and body painting, onto boards and later canvas using acrylic paint.

The members of the Papunya Tula company work in a variety of evolving individual styles. Since the mid-1990s, women have commenced painting for the company in their own right, rather than as assistants to their husbands. Members include: