The Estate of Paddy Bedford 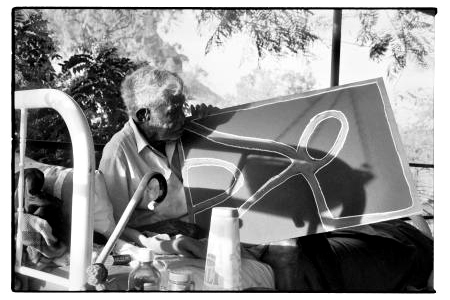 William Mora Galleries is pleased to announce that we have been appointed the sole agent for the Paddy Bedford Estate.

Paddy Bedford was known by his nickname Goowoomji and also by his Gija name Nyunkuny. As a senior law man Paddy Bedford was involved in painting as a part of ceremony throughout his life. However, he only began painting on canvas for exhibition after the establishment of Jirrawun Aboriginal Art in 1997. In a remarkable career as a painter, that spanned less than ten years, Bedford achieved great critical acclaim in Australia and internationally.

Bedford's paintings reveal a deep love of his country: the East Kimberley region of Western Australia. Many of his works depict features of this distinctive landscape such as the rivers, stock-yards and roads that were integral to Paddy's traditional life and that as a well regarded stockman. Much of the subject matter of his paintings are inspired by important events in his life, such as the Bedford Downs Massacre as well as his family dreamings of emu, turkey and cockatoo. Towards the end of his career Paddy declared that he had painted all of his father's country and his mother's country and that he was just painting.

A major retrospective of Bedford's work was held at the Museum of Contemporary Art in Sydney in 2006. In the same year his work was commissioned for the Mussee du quai Branly in Paris. A solo exhibition was held at the Utrecht Aboriginal Art Museum in the Netherlands in October 2009. Bedford's work is represented in many collections including Art Gallery of New South Wales, National Gallery of Victoria, National Gallery of Australia, Art Gallery of Western Australia and the Essl collection, Austria.