Daniel Walbidi is the youngster of the Bidyadanga school of painters. It was he who approached Emily Rohr to ask for her help in setting up a painting group with a real dealer. She did, and the group thrives.

The Bidyadanga community of some 800 people comprises five "tribes" who came out of the desert to esturine land when their waterholes failed. Mining operations disturbed the water table and the people had to take refuge on the coast, 250km south of Broome. Their various laws were melded into a new, less fierce one. Hard places make hard law.

Some good has come of the enforced move. Daniel Walbidi says, "I will be painting about all the country of the old people, all the different countries they paint. They are desert mob, but now they live at Bidyadanga, salt water country. It will be like a giant map." Indeed most paintings from this school show "hot" desert colours, and bright blues and greens. They are the cartography of memory - works painted to show the new generations about the former life, and the enforced migration. The style tends to net-like compositions.

Some of Daniel Walbidi's works resemble the paintings of his elders, neat reticulations in brilliant colours: colours which only Bidyadanga painters and certain Kelim weavers would put together. Some of Daniel's work is about the Wasp Man, and show the insect in its pre-winged state. The wasp pictures have an organic, and almost cartoon like feel as opposed to the elegant map motif they are visceral. The story of the wasp is about of course water, about, "the wasp chief whose people needed it because they were thirsty. He pretended to go a long way and always came back with water. His people wondered where he went to get it, so one day they sent some men to follow him. He went not too far, then tied the hair belt tightly around his waist and started to sing and dance, until water came up from the ground." From Moses striking the rock, to a myth still alive in the twenty-first century, the ancient first people carry the past and the present in one dilly bag of Dreamings.

Of Donald Moko, a Bidyadanga elder, Emily writes, "We believe he came to Bidyadanga in the late 60's, because of a major drought. When mining started in the Pilbara, all the waterholes north of there dried up, many people died, and many left the country." From the exuberance of colour and the bold effortlessly perfect "abstraction" of the old peoples' paintings one might fancy that they had come, at last, to their Promised Land. The facts of real life are harder. Much of the revenue of the community comes from art-making, and not every painter is a star to white fella eyes. Donald Moko, Bertha Linty, Jan Billycan, Weaver Jack, and Alma Webou are, and others will follow. Very old people suddenly begin to paint. Weaver Jack had her self-portrait in the Archibald - an expanse of "abstract" landscape, and a cross for "this is who I am". The first people didn't just live here, they were where they lived, and the "where" lived with them. The leading Bidyadanga painters are in their 70's and 80's.

Daniel Walbidi takes up the story in his generation. Emily Rohr writes of the old ones, "because of the distance travelled they seem to have memories of varying country, and often combine these elements to show movement, because their journey is so significant and marked a turning point in their lives." We can look forward to Daniel Walbidi both keeping and adding to the work of this desert-coast school. What we read, perforce, as abstraction is for him a living history, entrusted to him. But for now, all the stars of that remote place shine: the youngest as brightly as his elders. 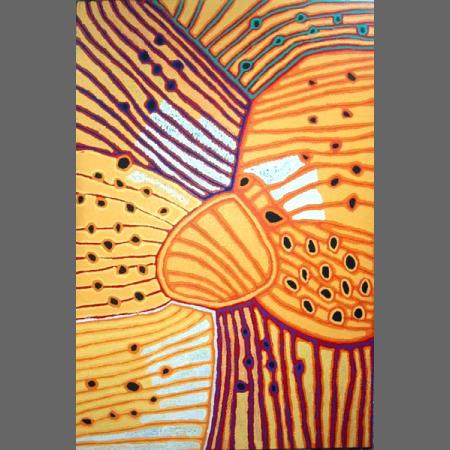