Jan Billycan Recent Paintings
& Weaver Jack That Is Me

Jan grew up in Ilyarra country. There are jila in this country including Karrparti, Kawarr, Jurntiwa and Wirrguja Jila. Other places include Dodo, Kartal and Kiriwirri and Yukarri. When Jan was young she walked all around these places, with her parents.

Jan says 'In living water there is a quiet snake. Sometimes he rises up, but we sing him down, sometimes he can travel and bring rain...Ilyarra is my country. Ilyarra, where I grew up. Lots of Tali (sand dunes) and jila in this country. This is big dog country.'

Weaver was born at Lungarung a jila (living water) in the Great Sandy Desert. This place is near Wirnpa country. Weaver grew up in this country, and there is a big snake living in this jila. She left this country as a young girl with her older promised husband who brought her to Bidyadanga. She lives there now with her extended family. She travelled around her country with her two mummies and daddy then was married off to her promised husband. She had children with him, and continued travelling further from her home. Eventually they came to be with Weaver's sister at Bidyadanga, this was in the 70's. She spent most of her life living traditional lifestyle, and she is considered to be the senior law woman for the Yulparija people in Bidyadanga. 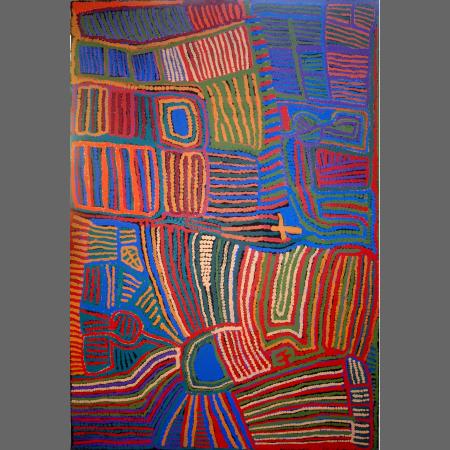