John Anderson's exhibition of new works affirms his position as a significant Australian artist who has expanded and remained faithful to the centuries old skill of painting.

In this era of "techno-fatigue", where many artists are focused on pushing the digital boundaries, Anderson's works are an affirmation of the age old art of "painting".

As art commentator Peter Hill says, "The centuries old skill of creating a painting from oils and pigments is the alchemist's art of turning oils into intellectual, emotional and financial gold", The Return of Painting, The Age, August 2005.

Anderson employs the techniques of the old masters in a 20th century narrative. The works, predominantly landscapes, give a sensation of travelling through the land, down a road or into a clearing experiencing a 360 degree enrapture with the world around.

These are impressionistic, contemporary masterpieces.

The figurative references which often suggest a sense of menace or foreboding frequently expressed in Anderson's work are still present. Against the tranquillity of rural living Anderson provides insights into contemporary urban society matched.

As a TAFE art teacher and historian for thirty years, it is not surprising that Anderson refers to many masters including Rembrandt and Caravaggio for the creation of space in a canvas - where void or space is celebrated as a moment.

Technical mastery of the medium is where Anderson is best with the perfection of the "wet-on-wet" method achieving a "just painted look". He works with an opaque underpainting followed by deeper and deeper tones, never waiting for layers to dry. The outcome produces lush atmospheric works.

Anderson has had sixteen solo shows since 1972 in Melbourne, Brisbane and Sydney including nine with William Mora Galleries. His works are held in significant collections including Artbank, Western Mining, BHP, Smorgon Collection and Monash University Collection. 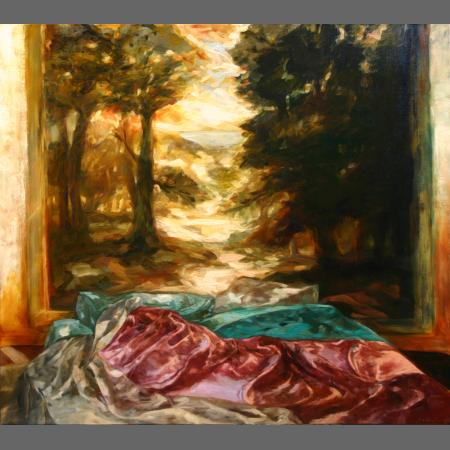